How to Make a Mary Poppins' Hat and Bird Umbrella

Have you checked out the price of costume props? Eeke! Why buy what you can easily make? All you need is some creativity and a glue gun! Check out how I easily made the Mary Poppins' bird umbrella and her iconic daisy boater hat out of felt. 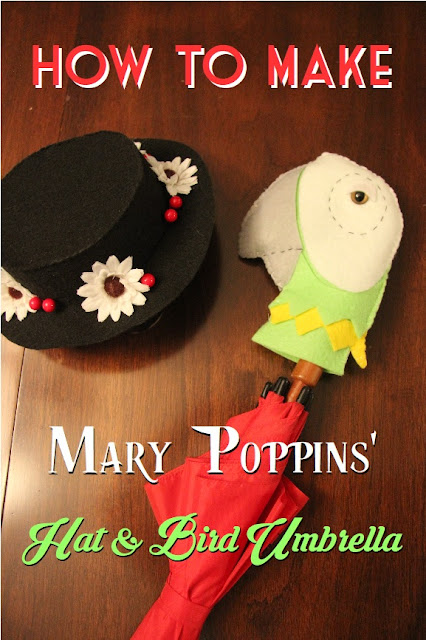 I'll start with the hat first. I initially planned to buy a hat and stick some flowers and red balls on it. But for the life of me I could not find a toddler sized small boater hat in black or any other color that would arrive before November (they were all coming on the slow boat from China). So then I decided that since Mary Poppins' hat is quite wonky itself I would just make one out of felt and not worry if it didn't look perfect. Check out this amazing close up I found of Julie Andrews on set for Mary Poppins! 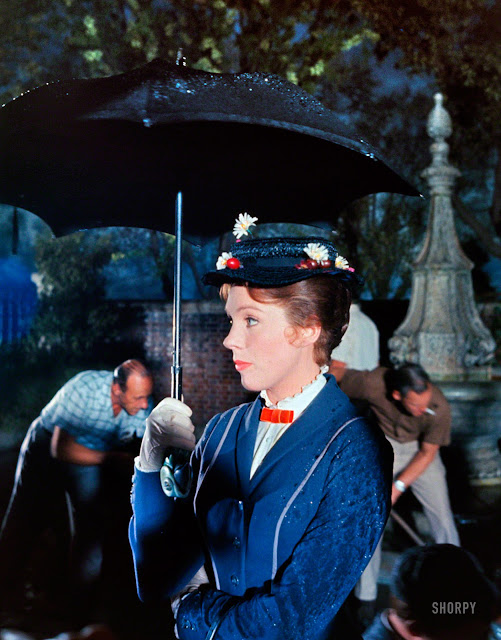 To make the hat I bought one large piece of black felt, a bunch of white daisies and a sprig of red ball Christmas flower thingies (sorry I forgot to read the tag for what they're called). You'll also need some black thread and a sewing needle. 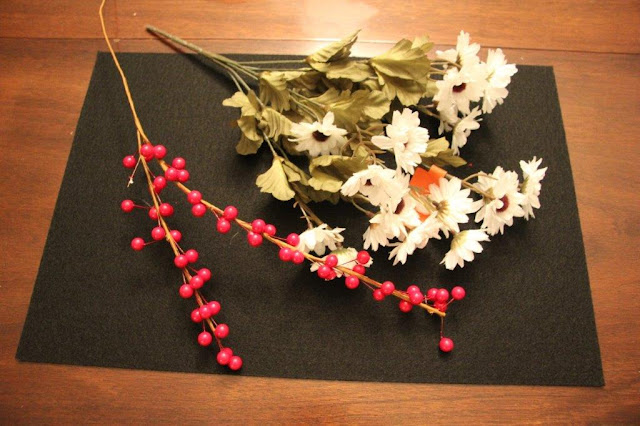 I measured Carolyn's head and then found a plate with the same circumference (17.5"). Let me tell you, measuring the head of a sleeping toddler should be easy, but dude does she toss and turn that was tricky! Then I used a larger plate to make the brim, about 2" bigger. The inside circle will be the top of the hat and the big O is the brim. 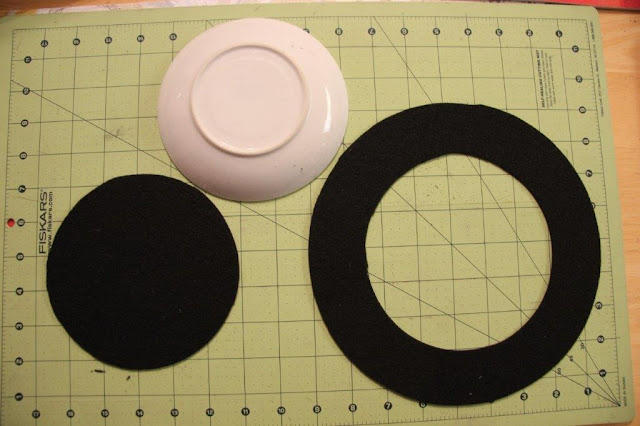 Then I cut a 2" tall strip along the edge of the felt to be the sides of the hat. And that's it, all you need are these three pieces to make the hat! 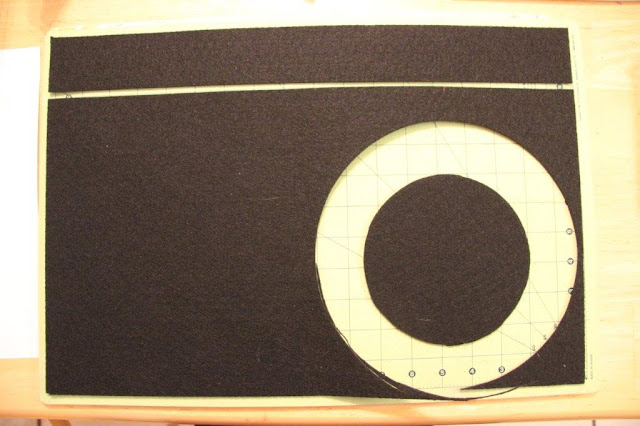 I whipped stitched the sides of the hat to the inside circle of the brim, even if you're not good at sewing this is so easy to do, you don't even have to worry about it looking ugly! 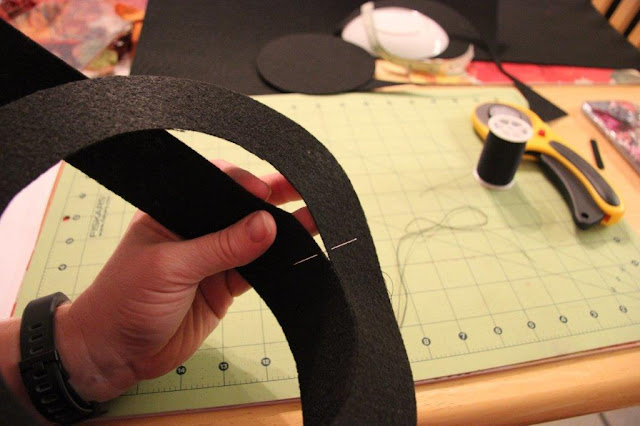 If you're wondering what whip stitching looks like it's literally going through both piece of fabric repeatedly from the same side so that the thread wraps around. 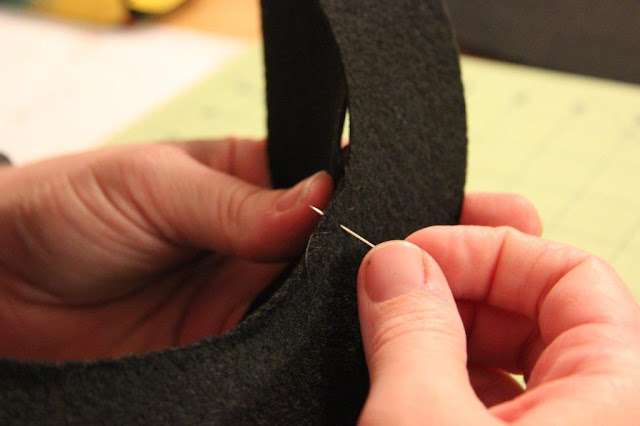 Around and around we go until the whole thing is connected, then go up the center seam. 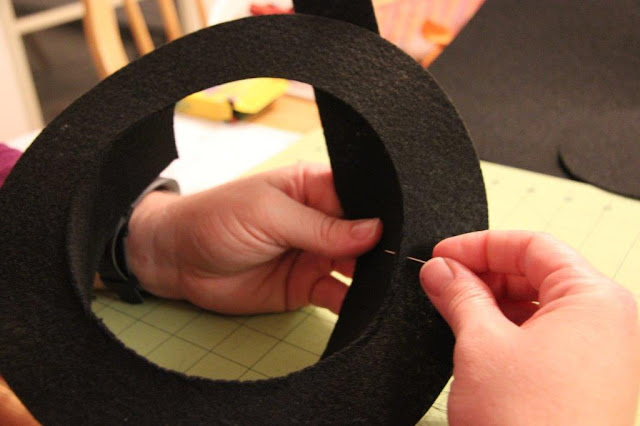 Next, whip stitch the top circle in place, remember Mary Poppins' hat is not flat it's brim is very wavy! 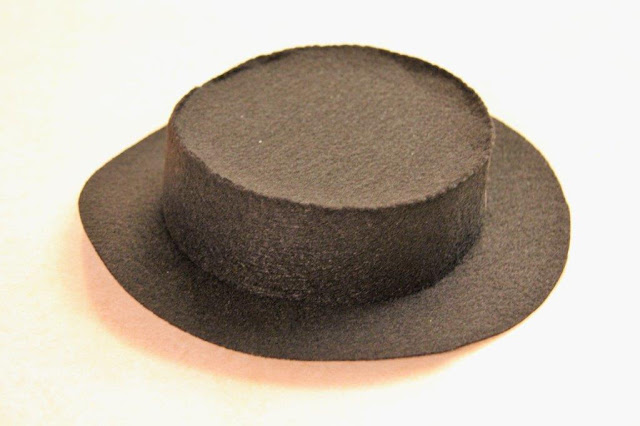 Then I plucked the flowers off their stems and stuck them around the hat until I liked their placement. I used wire cutters to snip off the red berries leaving 1" of their wire to have something to glue. Then I just hot glued everything in place and it was done! Boom, I literally made this in under an hour after getting home from an afternoon/evening at Disneyland! Because mom of the year award, I realized as we were on our way to the "Happiest Place on Earth" that the kids were supposed to wear their costumes the next day to music class and I hadn't made this, the bird or the skirt yet, WHOOPS! 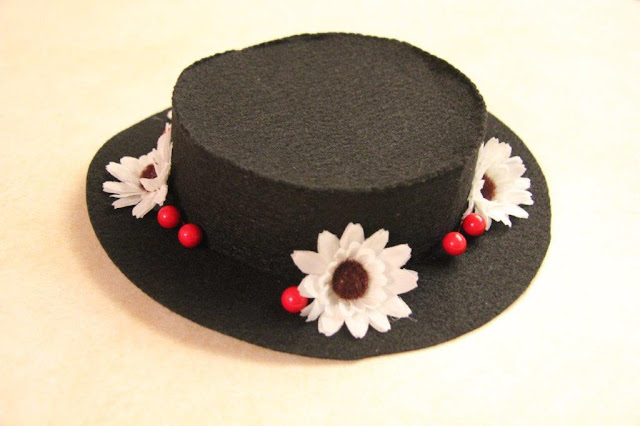 Sooooo she didn't get to bring the bird with her to music class, but really who wants a toddler running around class with an umbrella? Yeah, happy mistake! But for the sake of pictures she still needed the bird umbrella, more felt please!

For the bird umbrella I grabbed my childhood umbrella (so it's a little bit shorter) and some more felt. I used neon green, yellow, grey and white. Ignore the black, I didn't end up using it. I also bought some teddy bear plastic eyes at the craft store, I made sure to buy the ones that are more slit-like, like a cat's. 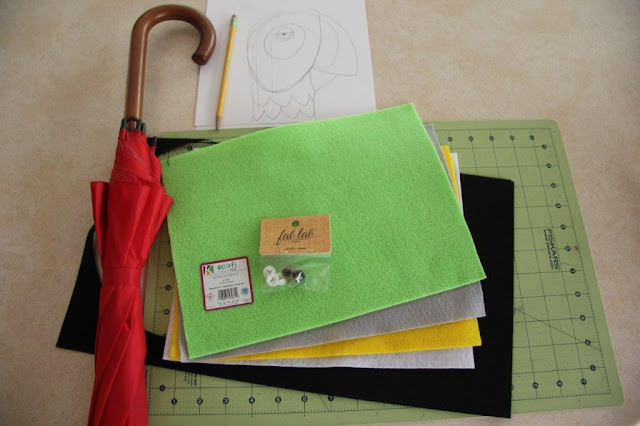 I used the green as my base for the whole shape and I folded it over the umbrella handle to confirm that it would fit. 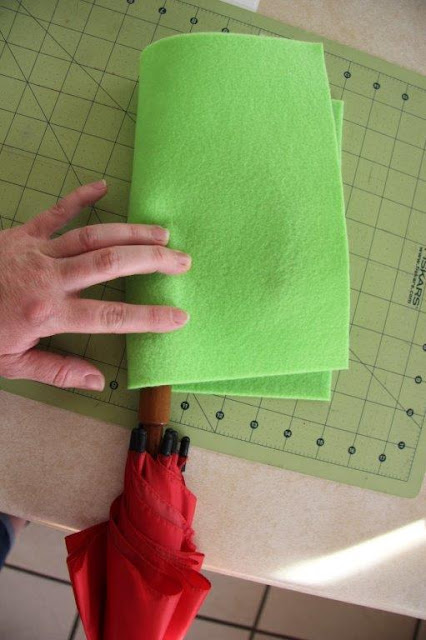 I traced my handle shape onto a piece of paper so that I would know the size I needed. Then looking at online pictures of the bird I sketched the bird over the umbrella shape. I traced this onto my felt and cut it out. For every piece I folded the felt over and cut two of each shape. 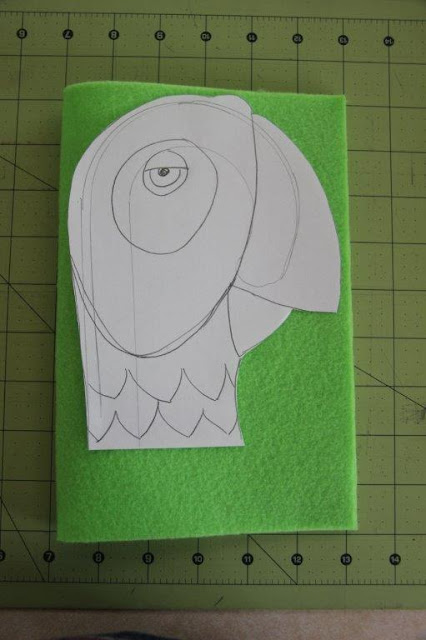 Then I traced my bird shape onto a second piece of paper and cut out the pieces separately. I used these to trace out the different pieces of the bird. First was the white portion. 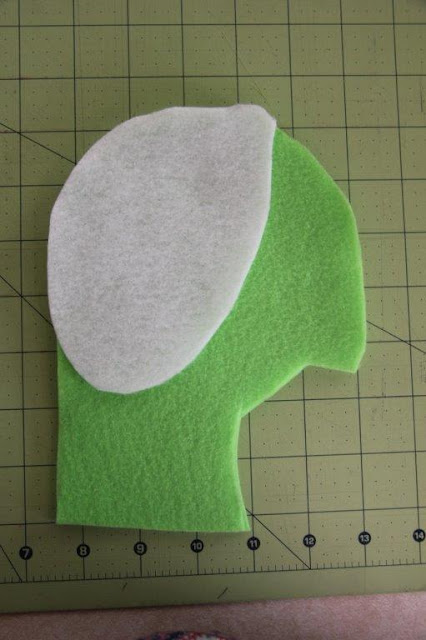 Then I did the same with the grey for the beak. At this point I realized that I wanted my pieces to hang over the sides of the green, so I decided to trim down my whole green piece by 2mm so that it would be slightly smaller and the sides of the white and grey would touch when I went to sew it all together, otherwise I would have had this large gap with green showing the the middle that you see here. 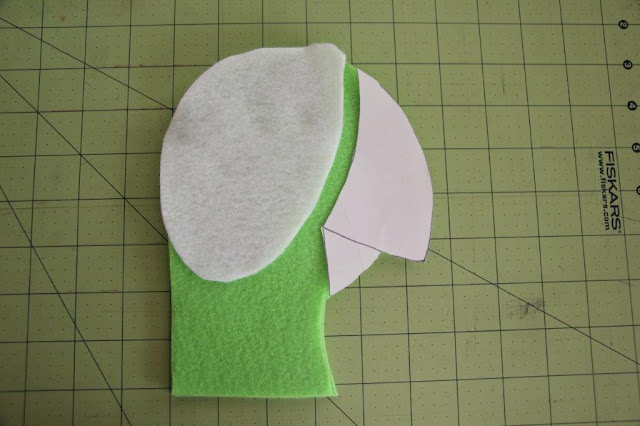 Then I cut one layer of green feathers and another of yellow. Once I had all my pieces cut and fitting I glued them all using Tacky Glue, but you could also totally use hot glue. 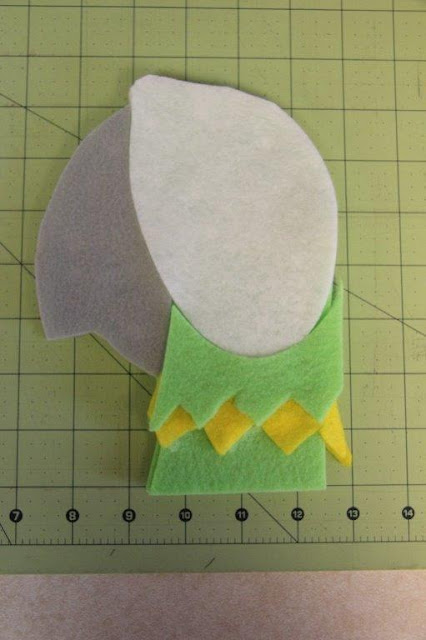 Apparently at this point I forgot to take pictures, if I recall Carolyn had woken up from her nap and I was trying to hustle it all along. I used an awl (or anything sharp and poky will work) to poke a hole on each side to insert the eyes, and attached the provided backing. Then I glued little have circle pieces of white felt on to make the eyelid. Next I took black thread, doubled it up so it would be thick, and went around they eye in a large oval shape to add that extra touch. At this point I noticed that part of my felt was not staying glued so I added some more glue and gave it some temporary stitches to hold it in place while the glue dried. 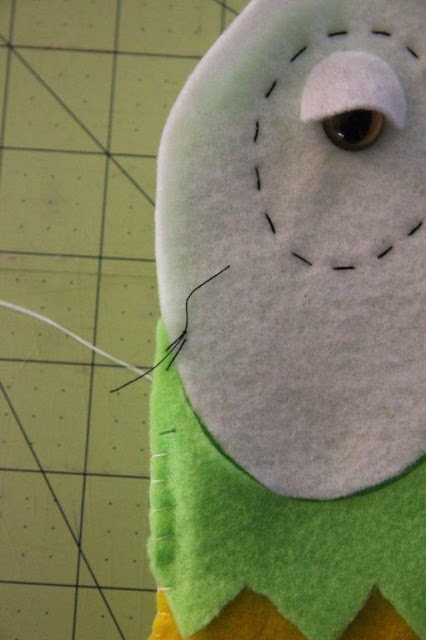 Here's a side-by-side of the finished bird and the outline I drafted. Don't mind the scribbles, that's just my sweet toddler's handy work. 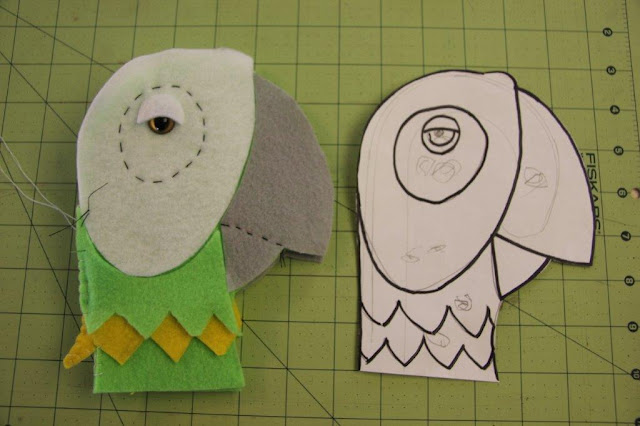 The final step was to use a blanket stitch to sew the two sides together, I did this by hand but you could totally do this on a machine, or if you really want to just glue both sides together along the edge (leaving the center open to stick your umbrella handle in). 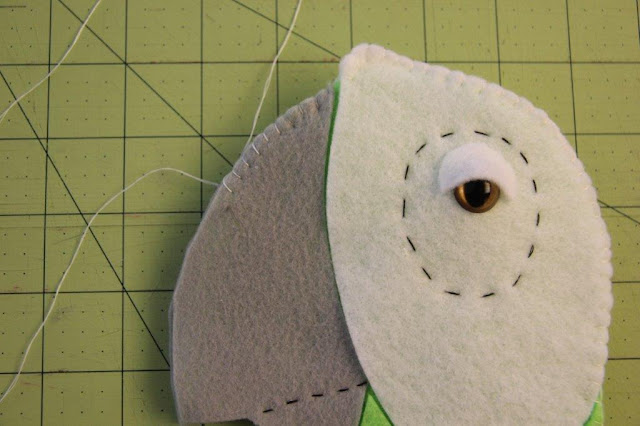 A blanket stitch is a lot like a whip stitch only when you come back up you go through the loop your thread has made, which then makes a nice outline along the edge. 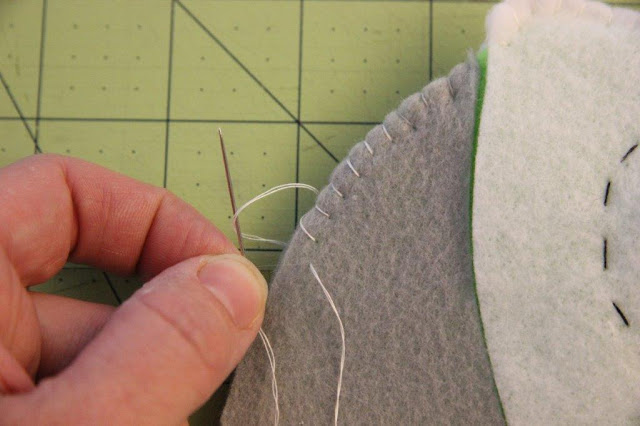 If this seems tricky check out YouTube for a tutorial, that's where I've learned almost all of my sewing skills! 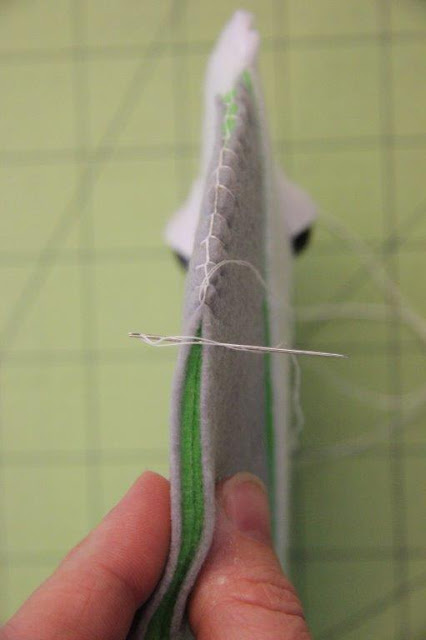 Simply slide your umbrella handle into the bird puppet and you're good to go! 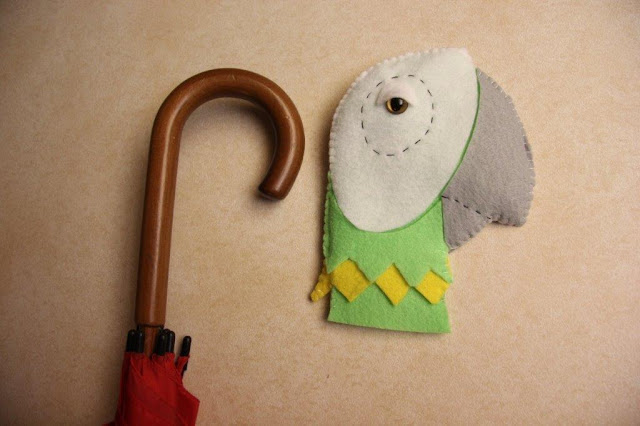 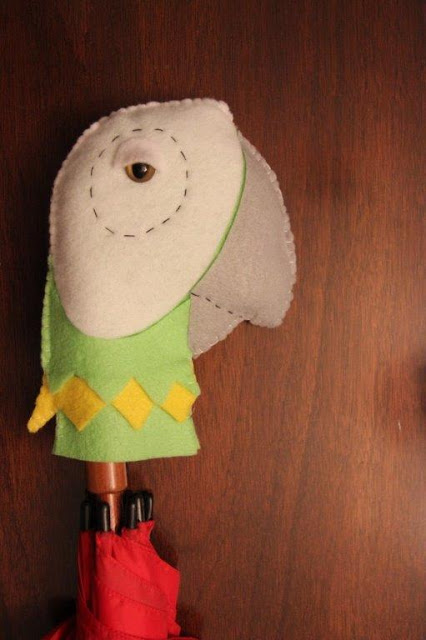 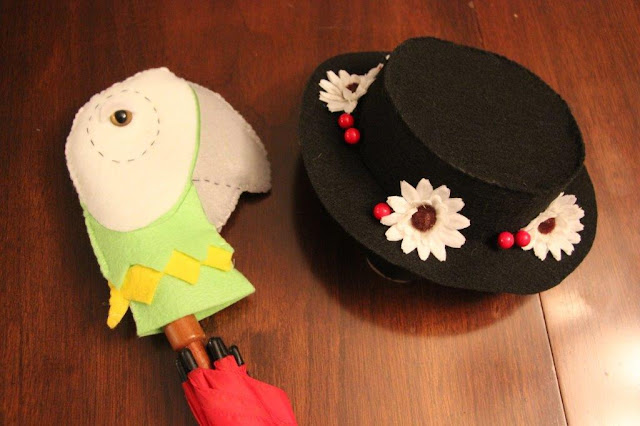 Now that you have your Mary Poppins accessories, it's time to get dressed! Check out how I cheaply assembled my two year old daughter's costume here! 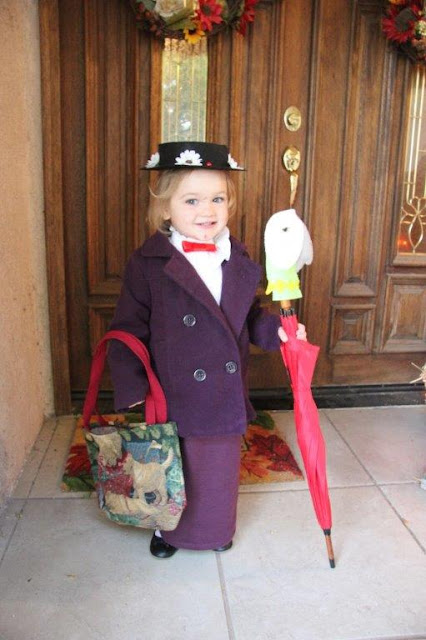 These accessories were super easy to make and hardly cost me anything, especially compared to buying them pre-made! What have you made for your own costume or for your kids?

Update: Carolyn still passionately loves Mary Poppins so I decided to make her the white dress too, you can read all about how I hacked that together here. 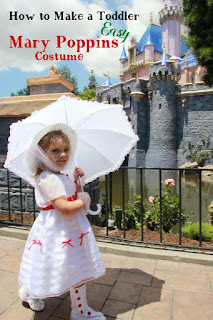 I apologize for a lot of missing pictures, especially in older posts. I was using PhotoBucket to host my pictures, but they've changed their rules and no longer allow links to them.
I will be re-uploading the pictures, but it may take some time... 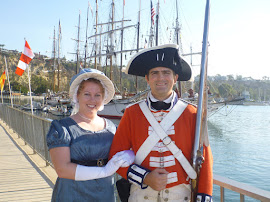 Welcome to Clearwater Cottage, we're so glad that you've stopped by! While you're here you'll find lots of ideas based on our experiences home keeping, decorating, celebrating the holidays, throwing parties, teaching and reenacting. 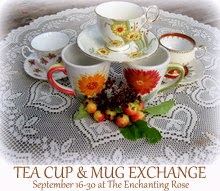 I love to be inspired by others, as I hope you will be inspired by me. Please feel free to use any of my images as long as you credit them back with a link to Clearwater Cottage. Thank you much!

Clearwater Cottage is a participant in the Amazon Services LLC Associates Program, an affiliate advertising program designed to provide a means for sites to earn advertising fees by advertising and linking to Amazon.com